This is a story about unhappy endings... 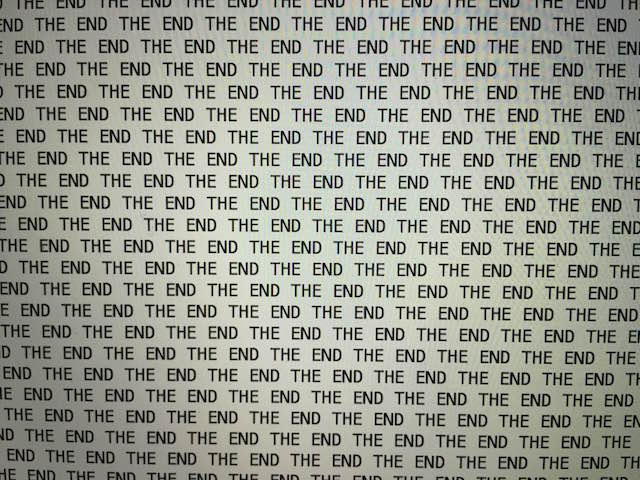 When things come to an end, it's hard to re-adjust. Our lives have almost perfect continuity: we segue from school to university to job to job to job... and then we die.

My life's been a bit different.

The conventional wisdom is that any gaps on your CV show that you're lacking moral fibre. You're flawed. You're a failure. You're malingering. You're going to be hauled in front of the authorities and be asked to give a good explanation for why you didn't shackle yourself to your desk, in some dead-end career that barely pays the bills.

Is it fear or is it poverty that keeps people working full-time, when really it would be a lot better if we could stop and smell the roses? Why is nearly every job a 5-day a week full time one, with at least 7 hours a day doing some dull pointless shit, keeping a chair warm? Surely we could get all the actual work done in 4 hours and then take the rest of the week off?

I decided to take the whole of November off so that I could write my first novel.

Now, I'm hunting for a new role in December. It's hard to find work in December: everybody is in holiday mode. No work is getting done. People are thinking about seeing their families, drinking too much and eating luxurious festive food.

My last contract finished prematurely when the commercial terms of the project failed to be agreed between consultancy and client. Everybody got the boot. I needed that money to get myself back on a good financial footing. My flatmate had to be kicked out because he was thousands of pounds in debt to me and showing no intention of getting a job.

Then I finished my novel.

I loved inhabiting that fictional world. I loved that people were reading and would ask me where the next chapter was, if I didn't publish one every day. I loved doing something creative. I loved having a goal; a project. I was master of my own destiny, and I achieved what I set out to do. I proved that I can set my mind to a task and be disciplined enough to keep working until it was done.

Now, I have absolutely no control of my destiny.

I'm not happy when I don't have a project; a mission; a goal; a target.

I'm a completer-finisher and it will be painful for me to have to down tools and spend the Xmas break impotently waiting for the working world to start up again in the New Year. I want ink dried on a contract. I want to work. I guess it's my fault for spending November writing a novel though, rather than speaking to agents and doing interviews.

My life goes like this: morning speaking to a procession of agents who phone me up asking if they can put my CV forward to their clients. Afternoon speaking to agents about roles that I've already been put forward for... trying to get some feedback and see if the roles are still actively hiring. Evening spent sending my CV out for every contract that looks any good. I also have phone and face-to-face interviews. I can't keep track of everything. It's disruptive, having to wait by the phone and speak to agents and interviewers. I'm glad I'm not trying to write my novel while I'm doing this. I hate being interrupted when creativity is in full flow.

The other thing I miss though, is the time and the space set aside for writing. Friends were excited that I was writing a novel and they would ask "do you need to write your chapter today?"

People were helpful, making sure I had space to be a novelist, even if it was just for a month. It was fun, to call myself a writer.

Sometimes surprising things can pay the bills. If I can edit my novel in January, I might be able to circulate it with some literary agents and see if it has any commercial potential. I can't see why my debut novel would be up to the required standard of a publisher, but it's worth a punt. I can always Kindle it as a plan B. It's just nice knowing that I did that: knowing that I have another achievement to be proud of. How many people can say they've written a novel in their lifetime? It's way cooler than saying that I've written computer games or business critical software. It's way cooler than saying I'm blogging. Everybody blogs, don't they?

Overcome with depression and frustration, I snipe at the whole bullshit system and flirt with disaster by linking my professional identity and my nom de guerre. I don't like pseudonyms and I don't like living a double-life. I'm not a keyboard warrior. I'm not a troll. I feel happier - after some initial trepidation - having as much of a unified identity as possible. Even an old colleague at HSBC - who I haven't seen for 12 years - somehow knew that I was briefly an electrician. What the actual fuck? I knew gossip travels faster than light, but that's ridiculous.

Is it that we are all applauding our colleagues who are brave enough to say "fuck the system" and go off and chase crazy dreams? We want to live a more exciting life - vicariously - through the people who quit the rat race. I'm that nutter who did iPhone apps, dot com tech startups, retrained as an electrician, was a whistleblower, became a novelist. People in offices with good 9 to 5 jobs just don't do anything that exciting or cool.

But, the reality is a lot more grim.

It's tough at the top. Being your own boss sucks. Dealing directly with customers sucks. Doing the right thing sucks. Being the odd one out sucks.

Alright, it doesn't suck, but the stress and the loneliness outweigh the financial rewards. Life is a constant battle when you're trying to do something different. Everybody's got 99 reasons why you're going to fail, why you should give up and why what you're doing is wrong and shit and useless and pointless. People goad you into trying, but then they secretly think "I'm glad I didn't try that myself" when things go wrong. I am glad I tried though. I am glad I've got those experiences, even if I'm left a little fucked up by it all.

So now, I've got this collection of awesome experiences. I've proven to myself that I can achieve awesome things. Problem is, it doesn't fit the mould. I haven't approached things from the usual angles. I've turned my hand to things that I thought I could do, and I did them. I succeeded, but nobody gives a shit. Nobody's ever going to ask me in an interview "how many profitable businesses have you founded?" or "how many books and computer games have you written?".

What now? What next?

When you do something different in society, you get a taste of freedom. You realise that things can be done. You realise you are capable. But... it will ruin you forever. The system doesn't want you back, because you're an independent thinker and you trust your own abilities. You don't need to prove yourself to anybody. You answer back. You're a dangerous inspiration to the drones in the hive: what if other people start questioning whether the 9 to 5 bullshit they do for five days a week is how they want to spend the best years of their life.

What's my plan? Milk the system for some more easy money and then go write more books. Buy a yacht and sail away. So crazy. So romantic. So unrealistic. But, what's the alternative?

Wage slavery and waiting for a retirement you'll never get to enjoy because you'll probably drop dead from stress before you get to spend that stockpiled lucre.